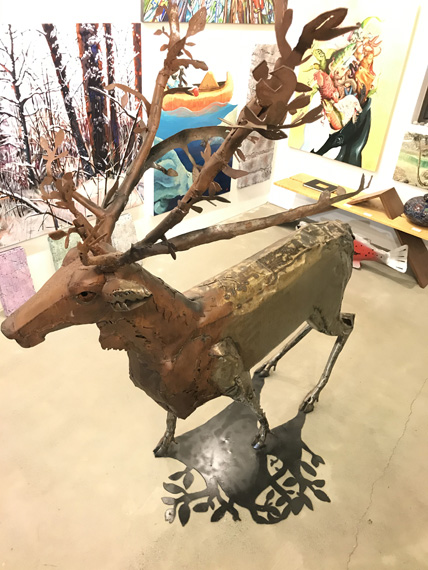 Christina Nick is a multi-disciplinary artist whose intense interest in nature, travel and the environment are reflected in her artwork. She spent years in British Columbia, Canada, working as an art teacher, wildlife guide and as a Park Ranger and Naturalist for the Provincial Parks system. Living in the wilds of the Coast Mountains she gained a deep respect and a lifelong interest in nature. In her artwork she reflects upon humanity’s role in the natural environment.

While living in Western Canada Christina spearheaded the organisation of a local art and performance show called “Artrageous!” in Whistler. After a decade of yearly shows this very successful event was effective in giving arts and culture a higher profile in the ski town. She was also voted Director of the Community Arts Council of Whistler, and participated in many solo and group shows since graduating from Mount Allison University in 1989 with a Bachelor of Fine Arts.

It was in Southern France where Christina first had international recognition with her artwork, notably her large welded steel sculptures. She continues to maintain a studio there, and works in welded steel, cire perdu bronze, carved stone and wood, and fibreglass resin. When not creating in her sculpture studio, Christina paints in mixed media and drawing from life. She is constantly adding to her sketchbook, whether doing drawings on-site of people and animals or quick watercolours of a landscape. She writes down her impressions and insights from her many travels around the world, and then uses them later in her studio as raw material for paintings and sculptures.

Christina is an avid ski tourer and has spent many seasons exploring the Coast Mountains in B.C. and the Pyrenees Mountains in France and Spain. When there is no snow, she hikes and mountain bikes whenever she can. While travelling, Christina has worked with rare and endangered species trusts in Africa and helped with cheetahs and vultures in a rehabilitation centre in Namibia. She also assisted in two archaeological digs in the Andes of Peru and helped study a rare species of hummingbird in Park Pinchincha in Ecuador.

Christina now works with Butterfield and Robinson, a Canadian travel company that organizes trips around the world. Biking and hiking trips in France and Spain are the staple of her guiding diet and Christina has now led numerous trips in the Galapagos Islands as well. On these trips she sometimes teaches watercolor painting and works in her sketchbook when she can.

In 2010 and 2011 Christina will be completing three monumental welded steel sculpture commissions. She has also been actively searching for gallery representation in both Paris, France and in Vancouver, BC. A two month voyage to Greenland and Iceland during the summer of 2010 will result in new works on paper, canvas and in three dimensions, created in her studios in Brackendale, BC and in Serres Morlaas, France. Christina is also searching for a publisher for her numerous travel sketchbooks.