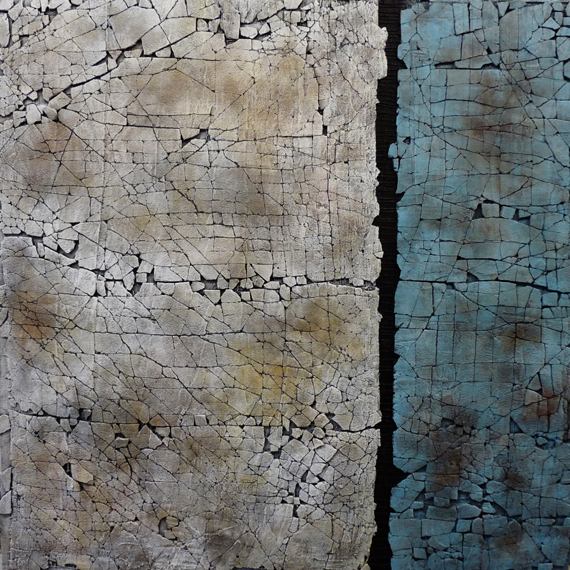 Originally from Cambridge, Ontario, Karen Bagayawa graduated with her B.F.A from Queen’s University in 1998. Her interest in traveling took her to Northern Japan to teach Kindergarten.  During her five year stay, she participated in group exhibitions at The Tokyo Metropolitan Museum of Art, The Sacramento Fine Arts Center, New York’s Limner Gallery and had solo exhibitions at Gallery La Vie in Northern Morioka. In 2004, she returned to Canada and enrolled in the Advanced Textile Arts Certificate Program at Capilano College. Upon graduating, she participated in group exhibitions at Vancouver’s Jacana Contemporary Art Gallery, The Craft House – Granville Island and had her first solo exhibition in Canada at Port Moody Art Centre in 2005. Karen has been working on her cracked fabric or ‘skins’ for the past fifteen years and her work belongs in collections throughout Japan, United Kingdom, United States and Canada. In 2011, Karen was awarded the Eastside Culture Crawl Commission – seven paintings were created for the Gold Sponsors of the popular Eastside Culture Crawl in Vancouver. She is represented by The Craig Yeats Gallery and Studio in West Vancouver and Art Junction in Whistler. Karen currently resides in Coquitlam with her husband Stephen and their three children Hanna, Jacob and Sienna where she is strongly influenced by her natural surroundings.