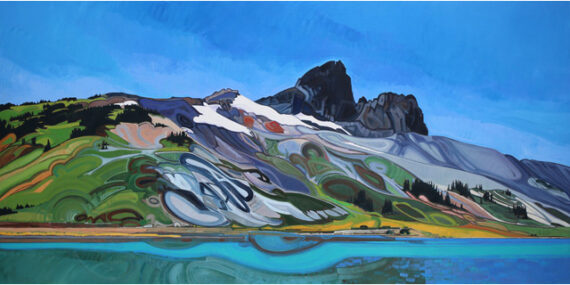 Sandra Harris was born in North Vancouver, in 1983. She received her Bachelor Of Fine Arts Degree With Distinction from the University of Victoria in 2007. Currently, she lives and works in North Vancouver, Canada. Her painting subject matter deals primarily with western Canada’s untamed landscapes created with acrylics on canvas.

Sandra paints from photographs that she has collected herself of scenes that she has physically been in and experienced. Thus, her paintings convey an authenticity that can’t be faked. The viewer can trust that there is a true sense of being in the wilderness in each of her paintings because they can feel it for themselves: the colour, the energy, and the movement that exists in the Natural landscape.

As a painter Sandra is largely influenced by the works of Tom Thomson and Emily Carr, as well as the Group of Seven. Her strength in art and the skill set required to create it is thanks in a large part to her initial interest in drawing, which she accredits to the uncountable hours spent replicating the comic book illustrations of Roger Cruz in her adolescence.

Beyond the juxtaposition of art and sport, Sandra has an avid interest in the psychology of C. G. Jung, and has read, listened to, or watched every lecture recorded of Joseph Campbell to satiate her interest in comparative mythology and understanding how exactly it relates to her own work.

Sandra attended Langara College from 2001 to 2003 where she was a member of the women’s basketball team while enrolled in the two-year fine arts program. She graduated with a Diploma of Visual Arts and immediately became involved with a six-month government funded public art program where she and other young artists designed, created, and installed the sea life themed tile mosaic in North Vancouver’s Lonsdale Quay fountain. After the program came to a close she completed a Certificate of Multimedia from UBC Continuing Studies partnered with Emily Carr. In 2005 Sandra returned to her artistic roots enrolling in the visual arts program at the University of Victoria. She graduated with a Bachelor’s of Fine Arts With Distinction in 2007. Currently Sandra is painting full-time and is represented by galleries in BC as well as Ontario.